The BBC has come under fire today after publication of its top salaries. The broadcaster has been accused of paying it's female stars less than its male stars. Of the 96 names on the list of talent earning over £150,000, only 34 are women.

It's likely that the list will be poured over by all BBC staff but especially female presenters working in the same or similar roles to their male counterparts.

So could this disparity lead to legal trouble for the BBC? It is very possible. Equal pay legislation in Europe provides that equal pay must be paid for equal work. Any difference must be objectively justified or defended on the basis that the work is not equal. This may be very difficult to do where two presenters are performing exactly the same role. However hurdles could arise for those considering a claim in that the presenters themselves may be independent contractors and not employees. Also after Brexit the UK will not be required to comply with EU legislation including equal pay laws.

Last year the Guardian reported the following on equal pay:

'Average pay for full-time female employees is still 9.4% lower than for full-time male employees, according to the latest official figures. That gap is only slightly better than the 9.6% recorded in 2015 but at least an improvement on 17.4% back in 1997.

Women continue to be penalised with lower pay and fewer promotions when they return to work after taking time away to care for children and because they tend to work in jobs with lower salaries, such as caring and administration. There is also a penalty for working part-time where pay, on average, is less per hour than in full-time work. And a far higher proportion of women work part-time – 41%, compared with only 12% of men.'

Publication of the salary levels will certainly lead to interesting looks in the green rooms and on set at the BBC! My view is that publication of the rates alone is a step in the right direction. How can women argue for and negotiate equal pay if they don't know what their male counterparts are earning? Ireland should certainly follow the UK in terms of gender pay reporting.

Here’s a roundup of the main points after the publication of the BBC’s top salaries. Chris Evans was paid at least £2.2m by the BBC last year while Gary Lineker collected more than £1.75m and Graham Norton more than £850,000, according to figures published by the corporation. Evans said it was “right and proper” that the public knows how much he his senior colleagues are paid. The list of 96 top earners exposed a series of gender disparities on pay in sports coverage, news, radio and TV. Only a third of the top earners are female and the top seven are all male. Lawyers have warned that the BBC is now exposed to sex discrimination claims by its female presenters. Labour’s Harriet Harman urged the BBC to stop using public money to discriminate against women. 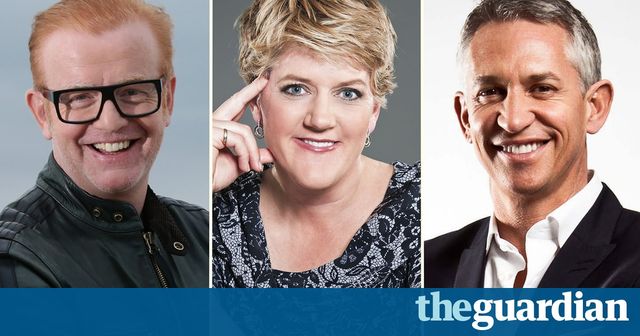 The real reason there is now a female Doctor Who https://t.co/TgR8XrKfjP